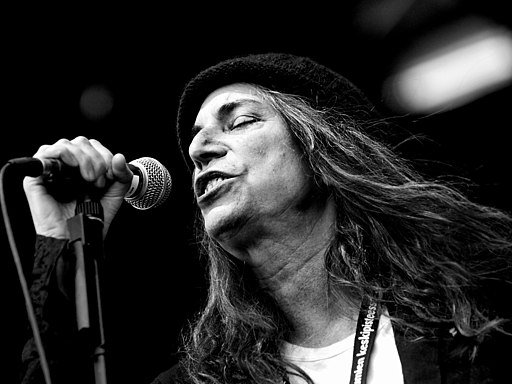 Has Dylan conferred great benefit to mankind? Listening to Smith sing his song—and watching as audience members, dressed in their finest, wiped their eyes, blindly reached for each other, seemed unable to exhale—the answer felt obvious. The answer was on their faces.

It would be a few days in Stockholm, in a beautiful hotel, overlooking the water—an honorable opportunity to shine, contemplate, and write. I chose one of my songs that I deemed appropriate to perform with the orchestra.

But when it was announced that Bob Dylan had won the prize and accepted, it seemed no longer fitting for me to sing my own song. I found myself in an unanticipated situation, and had conflicting emotions. In his absence, was I qualified for this task? Would this displease Bob Dylan, whom I would never desire to displease? But, having committed myself and weighing everything, I chose to sing “A Hard Rain’s A-Gonna Fall,” a song I have loved since I was a teen-ager, and a favorite of my late husband.

From that moment, every spare moment was spent practicing it, making certain that I knew and could convey every line. Having my own blue-eyed son, I sang the words to myself, over and over, in the original key, with pleasure and resolve. I had it in my mind to sing the song exactly as it was written and as well as I was capable of doing. I bought a new suit, I trimmed my hair, and felt that I was ready.

The opening chords of the song were introduced, and I heard myself singing. The first verse was passable, a bit shaky, but I was certain I would settle. But instead I was struck with a plethora of emotions, avalanching with such intensity that I was unable to negotiate them. From the corner of my eye, I could see the the huge boom stand of the television camera, and all the dignitaries upon the stage and the people beyond. Unaccustomed to such an overwhelming case of nerves, I was unable to continue. I hadn’t forgotten the words that were now a part of me. I was simply unable to draw them out.

This strange phenomenon did not diminish or pass but stayed cruelly with me. I was obliged to stop and ask pardon and then attempt again while in this state and sang with all my being, yet still stumbling. It was not lost on me that the narrative of the song begins with the words “I stumbled alongside of twelve misty mountains,” and ends with the line “And I’ll know my song well before I start singing.” As I took my seat, I felt the humiliating sting of failure, but also the strange realization that I had somehow entered and truly lived the world of the lyrics.

Thank you Peter O’Donnell, for letting me be part Modesty

The Shock Doctrine: The Rise of Disaster Capitalism
by Naomi Klein
tagged: currently-reading